Eliminate Self Doubt and Build Self Confidence.

Eliminate Self Doubt and Build Self Confidence

You know that little voice that pops in your head from time to time; “You can’t do that”, “that’s impossible”, “that looks too hard”, and “I will probably fail”. We all have heard this little voice, including myself. It’s been a lifelong mission of mine to kill ‘self-doubt’ within my own head. Self-doubt is one of the BIGGEST reasons that we don’t do many things that we want to in life. Many of us have been brought up, and told by everyone around us that “things don’t work out the way we want them to” or “don’t even try that! It’s impossible”. The truth is that we start to believe the people around us, and become someone that people tell us to be. We basically start living the life that people tell us to live.

I came across a book called ‘The 5 Second Rule’ by Mel Robbins. It’s a book that talks about how to overcome self-doubt. In the book, she talks about how self-doubt is a learned behaviour. Like I mentioned before, the people around us tell us things, and then we start to believe them. What we need to do is TURN OFF the self-doubt and build up our confidence.

Like anything else in life, we do things repeatedly. Then it becomes a habit, and the more that we do these things, the stronger the habits become. The good news is, that habits can be broken with consistent effort. The way that self-doubt works, is when you think of doing something and you don’t act quickly on it, a little voice will pop up suddenly and tell you why you can’t do it. Like I talked about last week, this is linked to a fear of failure, rejection, etc. But self-doubt comes down to the fact that you’re not willing to try.

To break this habit, and to build confidence, we must know that confidence is no more than a decision to try something. Just like working out, and building muscle, we must work our mind out, and build our self-confidence. If we thought that we could do anything, what would we attempt? I think that we would attempt pretty much everything. Mel Robbins talks about the 5 second rule to break t

he habit of ‘not trying’, and I want to share it with you. Remember, when you think of doing something, the fear of failure starts to set in very fast (in less than a second.)  The key is not to over think, and to act fast. When you think of doing something, instead of sitting back and analysing it, count down from 5-4-3-2-1, and just do it. Counting down interrupts the thoughts in your head, and counting back gets the body to jump into action. 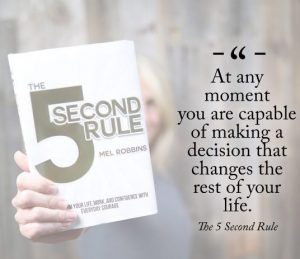 So, once you decide to do something, make the decision to do so. It’s all about sprinting into action. If you decide that you want to get healthy, and get into shape, just pick up the phone or walk into a gym, etc. and start. Don’t think about it, and like I said before JUST DO IT! To build confidence, is through the act of trying, and not being afraid of failure.

If you are afraid of doing something, ask yourself this question: Is it going to matter if I fail 10 minutes from now, 10 days from now, or 10 months from now? If not, which in most cases it won’t, you need to go for it, and don’t look back. Failing is nothing more than a learning opportunity, and the most successful people in life fail the most, the key is that they keep trying. So, next time a little voice pops in your head, I want you to count down 5-4-3-2-1, and put yourself into action mode. As we all know you can change your life in a second. Don’t let fear hold you back.

If you want to learn the science behind the 5 second rule, please follow link below.

Oops! We could not locate your form.